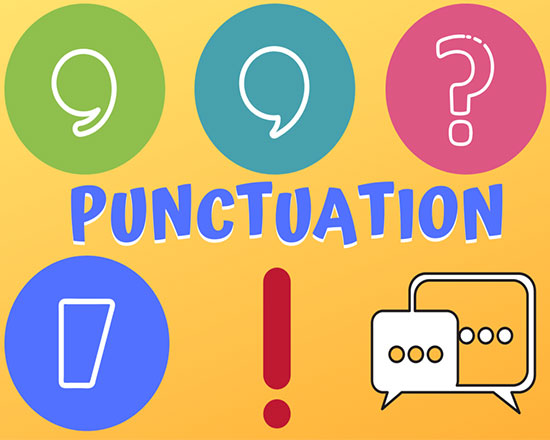 The period, full stop or point

The period (known as a full stop in British English) is probably the simplest of the punctuation marks to use. You use it like a knife to cut the sentences to the required length. Generally, you can break up the sentences using the full stop at the end of a logical and complete thought that looks and sounds right to you.

Many abbreviations require a period. Dr, Mr, Mrs, and Ms do not take a period in British English, nor do most abbreviations taken from the first capital letters such as MA, Phd, or CIA. In American English, some of these do require periods or both usages are correct (with and without periods). If you require 100% accuracy in your punctuation, refer to a detailed style guide for the abbreviation usage rules in the variety of English you are using.

Often you will see a sentence concluding with three dots. This indicates that only part of the sentence or text has been quoted or that it is being left up to the reader to complete the thought.

Period after a single word

Sometimes a single word can form the sentence. In this case you place a fullstop after the word as you would in any other sentence. This is often the case when the subject is understood as in a greeting or a command.

Numbers use periods in English to separate the whole number from the decimal. A period used in a number is also called a “decimal point” and it is read “point” unless it refers to money.

There are some general rules which you can apply when using the comma. However, you will find that in English there are many other ways to use the comma to add to the meaning of a sentence or to emphasise an item, point, or meaning.

Although we are often taught that commas are used to help us add ‘breathing spaces’ to sentences they are, in fact, more accurately used to organise blocks of thought or logical groupings. Most people use commas to ensure that meaning is clear and, despite grammatical rules, will drop a comma if their meaning is retained without it.

When making a list, commas are the most common way to separate one list item from the next. The final two items in the list are usually separated by “and” or “or”, which should be preceeded by a comma. Amongst editors this final comma in a list is known as the “Oxford Comma”.

A series of independent clauses (sentences)

A series of nouns

A series of adjectives

A list of adjectives usually requires commas. However, if an adjective is modifying another adjective you do not separate them with a comma (sentence 3).

A series of verbs

A series of phrases

Use a comma to enclose non-defining relative clauses and other non-essential details and comments. The comma is placed on either side of the insertion.

The exclamation mark is used to express exasperation, astonishment, or surprise, or to emphasise a comment or short, sharp phrase. In professional or everyday writing, exclamation marks are used sparingly if at all.

You can also use exclamation marks to mark a phrase as humourous, ironic or sarcastic.

Use the question mark at the end of all direct questions.

Do not use a question mark for reported questions

The colon expands on the sentence that precedes it, often introducing a list that demonstrates or elaborates whatever was previously stated.

The colon is also used to divide the hour from the minutes in writing a time in English.

The semicolon is somewhere between a full stop and a comma. Semicolons can be used in English to join phrases and sentences that are thematically linked without having to use a conjunction (example 1 below). Semicolons can also be used instead of commas to separate the items in a list when the items themselves already contain commas (example 2 below).

If quoting others within a quote, both single and double quotation marks are used to set the two separate quotations off from each other.

‘I haven’t spoken to Peter for months,’ Dianne said.’The last time I spoke to him he said, “I’m going to Bahrain and won’t be back for about three years”, I’ve heard nothing since then’.

Quotation marks both single and double are also used for specific purposes in bibliographic references or when citing sources in academic writing. There are a number of ways of organising bibliographies which set out standard formats. Most organisations and academic institutions will prefer one of these or have their own format published in a ‘style guide’.

The apostrophe probably causes more grief than all of the other punctuation marks put together! The problem nearly always seems to stem from not understanding that the apostrophe has two very different (and very important) uses in English: possession and contractions.

The apostrophe in contractions

The most common use of apostrophes in English is for contractions, where a noun or pronoun and a verb combine. Remember that the apostrophe is often replacing a letter that has been dropped. It is placed where the missing letter would be in that case.

People, even native English speakers, often mistake its and it’s, you’re and your, who’s and whose, and they’re, their and there. See below for the difference.

Plural nouns that do not end in s also follow this rule:

Ordinary (or common) nouns that end in s, both singular and plural, show possession simply by adding an apostrophe after the s.

A hyphen joins two or more words together while a dash separates words into parenthetical statements. The two are sometimes confused because they look so similar, but their usage is different. Hyphens are not separated by spaces, while a dash has a space on either side.

Generally, hyphens are used to join two words or parts of words together while avoiding confusion or ambiguity. Consult your dictionary if you are not sure if a hyphen is required in a compound word, but remember that current usage may have shifted since your dictionary was published.

There are some cases where hyphens preserve written clarity such as where there are letter collisions, where a prefix is added, or in family relations. Many words that have been hyphenated in the past have since dropped the hyphen and become a single word (email, nowadays).

In some cases though, a hyphen does change the meaning of a sentence.

Use a hyphen with compound numbers from twenty-one to ninety-nine.

Usually we use square brackets – [ ] – for special purposes such as in technical manuals. Round brackets – ( ) – are used in a similar way to commas when we want to add further explanation, an afterthought, or comment that is to do with our main line of thought but distinct from it. Many grammarians feel that the parentheses can, in fact, be replaced by commas in nearly all cases.